The Spark of Rebellion

The spark of Rebellion in Bow and Mile End (2.5 hours)

Soon after this walk begins you find streets with Welsh names reflecting the Welsh iron industry’s role in the East End and a strange and magical underpass. But the main focus is on the economic and political struggles in this area from the 1880s to the 1920s

On this walk you will discover how, in the 1880s, the exploited and the oppressed fought for their rights in the factories, in the gas works, in immigrant tailoring workshops and at the docks. The struggle of women workers is especially highlighted.  You will find some unexpected links between their struggles for better lives. Names such as Annie Besant, Eleanor Marx, Will Thorne and Ben Tillett become a major part of the story.

As the tour crosses into the 20th century it walks through sites connected with the East London Suffragettes, led by Sylvia Pankhurst, and the Poplar Labour councillors, led by George Lansbury, who risked prison rather than force unfair rate demands  on their constituents. 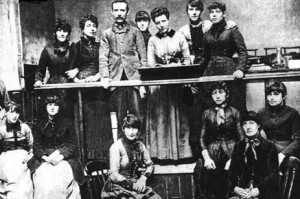 What they say about “The Spark of Rebellion in Bow and Mile End” tour:

“it was fascinating, sad and inspiring in equal measures and a pleasure to be guided by someone so knowledgeable” (Melanie C – north London)

“Marvellous and inspiring. It brought to life a past that should be remembered.” (Aditya S – north London)

“You packed an amazing amount of information in two and half hours. Thank you.” (Naomi S – east London)