A walk through the 1930s East End from Gardiners Corner to Cable Street. (2.5 hours)

The stirring story of how the East End resisted the invasion of Oswald Mosley’s fascists in October1936, has become an iconic moment in London’s 20th century history, but this moment has a back-story, and an aftermath, that are revealed through this walk.

You will find out who Oswald Mosley was, why he was so determined to build a popular base in the East End, and what this meant for the large Jewish population that inhabited this area. 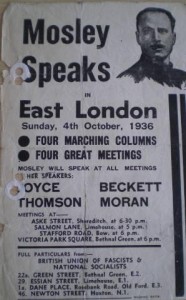 You will find out about the different arenas in which the anti-fascist organised and the roles of people like Phil Piratin and Joe Jacobs in mobilising a response.

You will learn why and how the Jewish People’s Council was created and what it did to stop the growth of fascism in the East End.

The events of October 4th 1936 centred especially on Gardiners Corner and Cable Street, both of which are visited on this walk.

What they say about the “Anti-Fascist Footprints” tour:

“David’s knowledge and enthusiasm brought the period to life, reminding me of things I’d forgotten and introducing me to new characters and events in the rich history of East London’s anti-fascist struggle. We went away feeling inspired to keep these great traditions of unity and defiance alive” (Steph G – East London)

“Your knowledge, passion and enthusiasm was contagious and we both came away feeling that we had just taken part in something very special indeed.” (Nadiya R and Nick D – Sussex)

“The tour was absolutely fantastic – it was great to be taken around by a guide who knows the area and its history so well. As a local resident, I had no idea just how much history was on my doorstep or just how much the East End’s history can inform the politics of race and migration today. It was an inspiring trip, and I’d highly recommend it.” Rowenna D (east London)

“What is great about David’s walks is that they place the history and experience of East London’s Jewish and working class communities into a context that can be drawn on by today’s anti-fascists.” (Kevin B – east London)