Radicals, Rebels and Rioters in the Fleet Street precinct

Named after the River Fleet which now runs underground, Fleet Street itself, and the maze of alleys leading from it, have been a centre of printing and publishing from the early 1500s. During several period in the centuries since then, it has been been home to radical pamphleteers and publishers writing incendiary words, exposing injustices and inciting revolt. A number of radical organisations have had their offices and headquarters here.

For much of the 19th and 20th centuries it was also home to leading bastions of reaction – the right wing press engaging in ideological warfare on behalf of the ruling class class.

In the early modern period rich and poor lived cheek by jowl in and around this street and it had more than its fair share of mass confrontations and riots.

The tour takes in some fascinating and unusual sites in this conflicted street and shows how the traces of its rebellious past are still present. 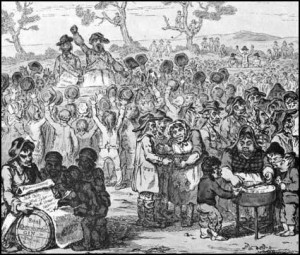