Life on the Boundary: Housing, poverty and resistance in Shoreditch and Bethnal Green

The East End of the 1880s was vividly described by the writer JH Mackay as the “Empire of Hunger”. He drew a searing picture of poverty in the streets of Bethnal Green close to its boundary with Shoreditch.

The notorious Old Nichol slum, dramatised in Arthur Morrisson’s realist novel, Child of the Jago,  housed more than 6,000 impoverished people, in terribly overcrowded conditions, occupied a set of narrow streets and alleys right against Bethnal Green’s boundary with Shoreditch.  Such poverty existed very close also to the boundary with the City of London and its citadels of wealth. 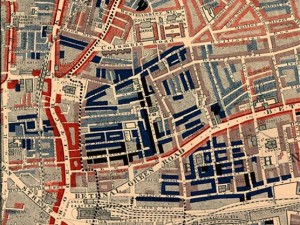 unty Council focused its first major slum clearance on the Old Nichol and built a model housing estate in its place. The LCC’s housing department was determined to build better homes for worming class people – or at least a layer of the working class –  at a time when the East End was expanding and that working class included a new and large influx of pauperised immigrants from the Tsarist Russian empire.

The fight for better housing was a major aspect of the fight for better lives. There were winners and losers, successes and disappointments. This walk explores the struggles around housing, landlords, poverty, health and education in a small patch of the East End in difficult times.

“David’s walk was exceptional. Focused on the housing history of a small part of Bethnal Green, we didn’t actually walk far. But we did hear a story, developed over two hours like the plot of a thriller. Racketeering landlords, a sensational novel, philanthropic business people, and then the glory of one of London’s finest examples of council housing.” Sybil C (east London)