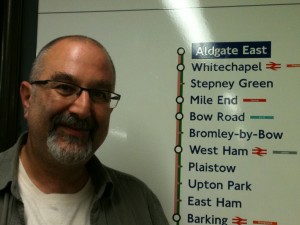 David Rosenberg was born in London in 1958. His grandparents came to the East End as Jewish immigrants from the Tsarist Russian Empire in the 1900s. At first they lived just off Cable Street, then later on Princelet Street and Hanbury Street just off Brick Lane.

As a teacher and educationalist he has  participated in projects in Uganda, South Africa and India. His writing on history and current affairs has featured on several Channel4 websites and in many print publications including the Guardian, New Statesman, Red Pepper, Morning Star and Time Out. He is the author of Battle for the East End: Jewish responses to fascism in the 1930s, (Five Leaves Publications, 2011) and Rebel Footprints: a guide to uncovering London’s radical history (Pluto Press, 2015, 2019)

David worked in the East End as a warehouseperson in the mid-1970s, and again in the late 1970s and worked as Publications Officer for the Runnymede Trust in the late 1980s when they were based just off Brick Lane.

He has a longstanding commitment to Yiddish – the mother tongue of many of the East End’s Jewish immigrants – though more recently he has been been learning Stylheti Bengali and Swahili, languages of some newer immigrants to East London. He was a frequent visitor to West Ham’s football ground from 1966-2017 and was a regular columnist for OLAS, the West Ham football fanzine for the last decade of its existence. 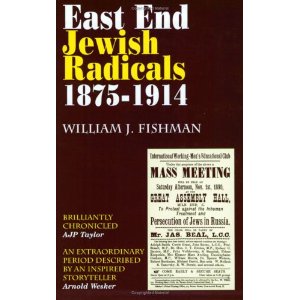 David acknowledges a huge debt of gratitude to the late Professor Bill Fishman, an innovative and inspirational social historian, and author of East End Jewish Radicals, The Streets of East London and East End 1888, who pioneered historical walks through London’s East End. David went on one of Bill’s walks in the mid-1980s and is very proud to continue to walk in his footsteps. Read David’s obituary for Bill Fishman.

“David is a great leader for a walking tour. He is massively and interestingly well-informed, providing a combination of historical and personal details relating to the area and what happened there that really brought the era of the 30s – the people and the politics alive. He showed a respect and love for the streets of the East End, and an enthusiasm for highlighting the relevance of the past to the present day that was both easy to listen to and really compelling.” (Harriet S – N London)