The Russian Revolution and the East End

From the early 1880s, the East End was home to large numbers of Jews who fled the Tsarist Russian Empire. Many of them retained contact with the ‘old’ country, and helped to organise meetings here to publicise, protest and campaign about what was happening there. Other non-Jewish Russians, including Lenin, came to London as political exiles and spoke in the East End. Some radicals from the Russian Empire hit the news when they were holed up in a dramatic siege in Sidney Street.

When conscription came in during the First World War, many Jews were alarmed at the prospect of joining an army allied with the Russian Tsar. They won support for their plight from significant radical political figures locally but encountered hostility form local patriots.

This walk takes you through the stories of these people and events. 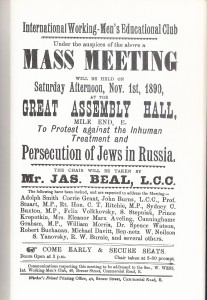 What they said about it:

“I loved the way you brought the people and their stories to life.”  Jude L (North London)

“I thought he walk and talk was brilliantly structured. I had thought I knew my area well, but I learned so much, especially the involvement of the Bund.” Sybil C (East London)