The 1970s was a dramatic decade in East End history. Decline on the docks, a changing population, new immigrants, renewed fascist activity, and blood on the streets. Struggles around housing and schools, new cultural expressions. Old problems of poverty and exploitation. New problems on the horizon, but also a new energy and desire for progress.

Brick Lane and the area around it became a centre of many of these changes and a battleground where many of these issues were fought out.

This walk takes you through the events that took place locally in this tumultuous decade and the personalities involved. 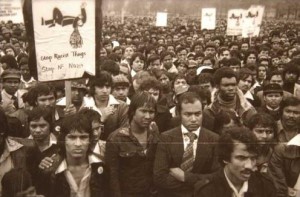 “Battleground Brick Lane 1970s was a really interesting insight into a period of recent history that I’d personally had some peripheral involvement with but known very little about in the way of detail. It was a fascinating weave of stories, with well known protagonists, lesser known community activists and David’s personal anecdotes, all recounted with a lovely helping of irreverent humour.” Ruth F (South London)

“This is modern history that is well-researched, and brought to life in an engaging and thoughtful way yet again by David. Unmissable!” Danny D (South London)