Battle for the East End: Jewish responses to fascism in the 1930s 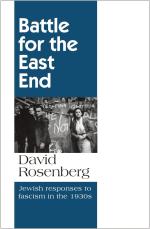 What’s the book about?

During the 1930s, Oswald Mosley’s Blackshirts intensified their campaign against the Jewish community, particularly in London’s East End. As that campaign became more overtly antisemitic, and more physically intimidating, Jewish groups debated how to deal with the Fascist threat, ultimately building their own defence organisations, and forging alliances with other campaigners.  The simmering tensions in East London culminated in the Battle of Cable Street, when more than 100,000 people, especially from the local Jewish and Irish communities, prevented Mosley’s troops from marching through the East End.

In Battle for the East End, David Rosenberg charts the changing nature of the British Union of Fascists’ ideas about Jews and describes the growing rifts between the official leaders of the Jewish community and those who wanted to mount an active resistance to the fascists.

2. How Jews were viewed

3. The rise of Mosley’s movement

4. Antisemitism and the British Union of Fascists

5. How Jewish leaders perceived the threat

6. Battle for the East End

7. Divided on defence: the grassroots rebellion

8. Rally to Aldgate and Cable Street

9. Antisemitism, fascism and the state

“Battle for the East End is written by an anti-fascist activist with a real feel and connection both to the politics and the geographical area he writes about. For anyone who wants to understand the political, historical and cultural context in which the Battle of Cable Street took place then Battle for the East End is a must for the bookshelf.” Searchlight Educational Trust

David Rosenberg has given us a crucial historical record of antisemitism and fascism in Britain. It is eminently readable, with excellent eye-witness testimony. Importantly, he shows how the state institutions responded when the activities of fascist organisations became a serious public order issue, siding with organisations such as the British Union of Fascists. As racism and fascism continue to rear their ugly heads worldwide, this book is a must read. Pauline Black (lead singer of The Selecter)

“The Battle of Cable Street is one of the most celebrated moments in Anglo-Jewish history and, in Battle for the East End, David Rosenberg gives a compelling account of the context and controversies that surrounded it, made even more vivid by eye-witness testimony.” Nadia Valman, Jewish Chronicle.

“David Rosenberg’s excellent Battle for the East End gives a gripping  chronicle of the events surrounding the march. Rosenberg’s book is clearly written and argued, full of day-to-day storytelling and is a potent addition to the historical scholarship of the dramatic events. It is also a very readable book that is extremely difficult to put down.” Chris Searle, Institute of Race Relations Website

“David Rosenberg’s meticulously researched  yet highly readable Battle for the East End records the events that led up to the face off… I would like to share a heartfelt recommendation that all those interested in the history of British Jewry or the growth of fascism before the Second World War should pick up their own copy.” Liat Collins, Editor Jerusalem Post Magazine

“Absolutely bloody brilliant! thank you so much for writing it! What an invaluable piece of work for the struggles of today!” James Haywood, President, Goldsmiths Students Union

“In David Rosenberg’s Battle For The East End the class nature of the fight against fascism is brought to the fore. In the run-up to October 4 1936 the Jewish establishment urged the people whom it was supposed to represent to refrain from becoming involved in the events that were likely to happen that day. Rosenberg looks at how the debate unfolded as those at the sharp end of antisemitism clamoured for, and supported, initiatives independent of the official communal leadership.” Steve Silver, Morning Star